The previous owner bought the two-level penthouse from developer Keppel Land at $2.4 million ($741 psf) in August 2005, before Park Infinia at Wee Nam was officially launched in October 2005. He sold it to a Singaporean buyer for $5.1 million ($1,577 psf) on Sept 15. The transaction marks the highest profit at Park Infinia at Wee Nam in 2017, based on the matching of URA caveat data.

Since its completion in 2008, there have been seven profitable transactions and no unprofitable ones for units larger than 3,000 sq ft at Park Infinia at Wee Nam. Profits ranged from $850,000 to $2.71 million. All seven units were located on the 29th floor.

Located on Lincoln Road, the 486-unit Park Infinia at Wee Nam was one of the largest condominiums in the Newton area when it was launched in October 2005. The condo has 30- and 36-storey towers that house one-to four-bedroom units as well as penthouses. Units measure 560 to 3,315 sq ft. According to Keppel Land, the freehold condo was fully sold in 2009.

Park Infinia at Wee Nam is located within walking distance of United Square Shopping Mall and within a 1km radius of St Joseph’s Institution Junior.

8 @ Mount Sophia led the revitalisation of the Mount Sophia area in District 9 when it was launched and fully sold by Frasers Centrepoint in November 2002. Located within walking distance of the Dhoby Ghaut MRT interchange and Plaza Singapura, the 103-year leasehold condo is near St Margaret’s Primary School. 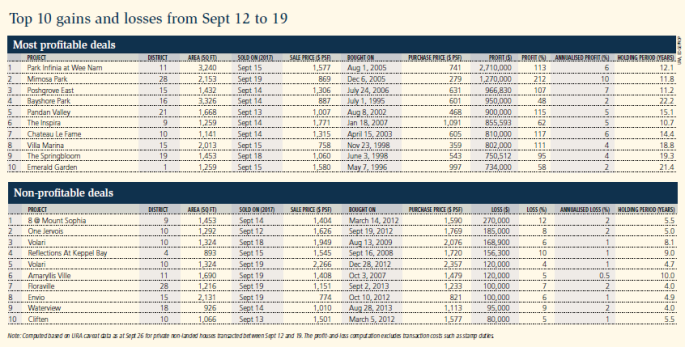