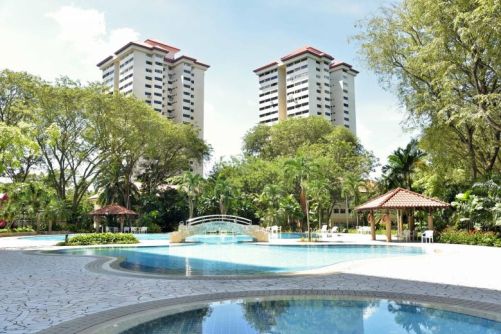 Normanton Park estate near Kent Ridge Park has been sold for $830.1 million in one of the biggest collective sale deals seen here, it was announced last night.

The price paid by Chinese firm Kingsford Huray Development is the highest land rate – that refers to price per square foot per plot ratio – for a 99-year leasehold collective sale site this year.

It was also more than $30 million over the reserve price.

Each owner at the 488-unit former HUDC estate will get a gross price of between $1.68 million and $1.86 million if certain conditions are met.

The huge deal is seen as a property market game changer for bigger sites.

“This sale changes the assumption that there may not be appetite among developers for the big sites,” said Dr Lee Nai Jia, head of research at Edmund Tie & Company.

“Now, even the bigger sites are attracting developers, especially if there is big redevelopment potential. And this site has merits. It is close to the Buona Vista growth story.”

The winning bid comes with an estimated $231.1 million additional payment to top up the lease to 99 years.

There will also be a fee of about $283.4 million to redevelop the site to a gross plot ratio of 2.1 based on the maximum permissible gross floor area of about 1.39 million sq ft.

This translates to a land price of about $969 per square foot per plot ratio.

“We deliberated all submissions carefully and the decision to award to Kingsford was unanimous.”

“The sale is subject to government approval of the outline planning permission and the lease top-up,” he added. More than 80 per cent of the owners consented to the sale within just 11 days of the first signature.

A public tender was launched on Aug 22, and closed on Oct 5 with a reserve price of $800 million.

Located close to nature parks, it was built in the mid-1970s for the Singapore Armed Forces.

Mr Ian Loh, executive director and head of investment and capital markets at Knight Frank, said: “The gross development value for this project is estimated at $2.23 billion. The new high-rise development could potentially house more than 1,200 new residential units of 100 sq m.”