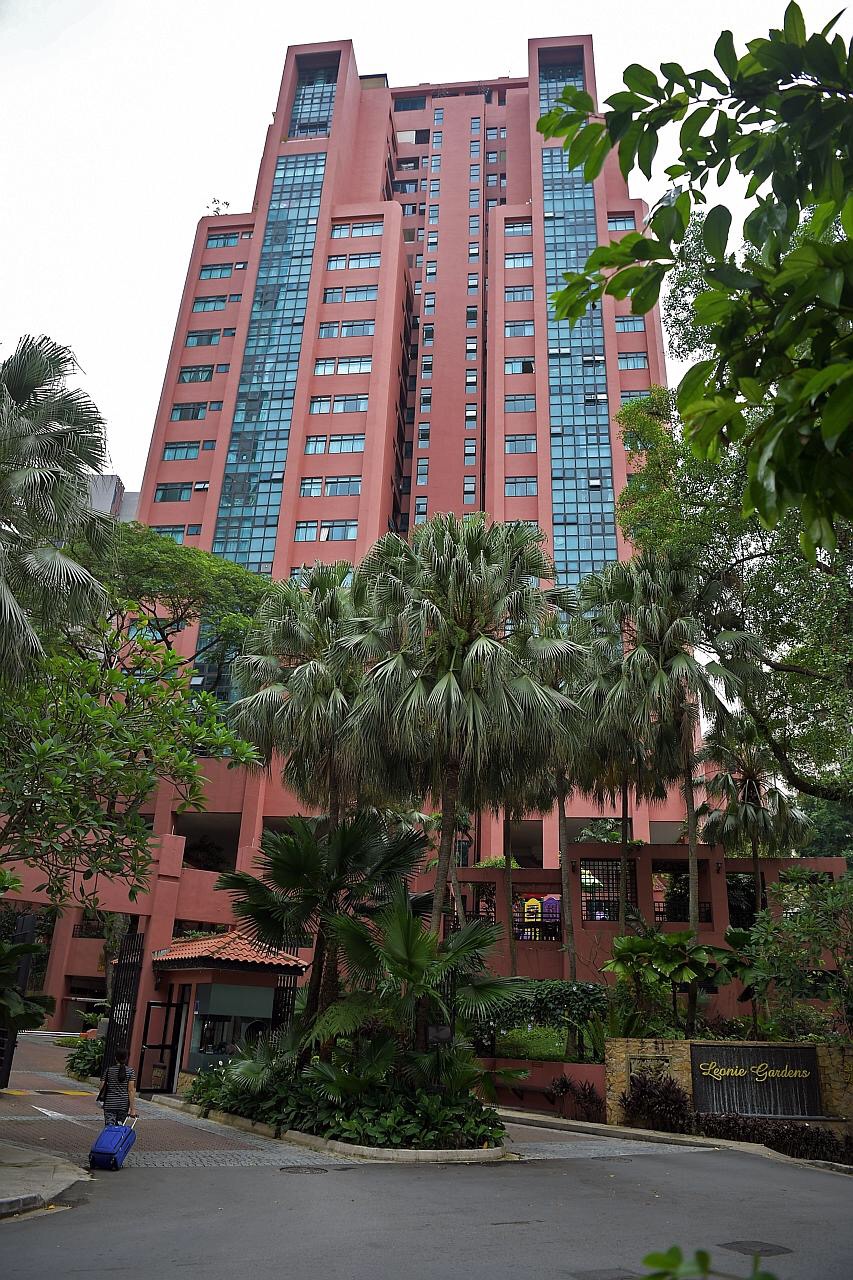 It’s almost a case now of another day, another estate sold en bloc.

The latest to join the fray looks like Leonie Gardens in Leonie Hill, which is off Grange and River Valley roads.

The upmarket condominium has made a move for its first collective sale attempt with the formation of a sales committee.

However, with the strong possibility of more estates in the core central region also going for a collective sale jackpot, industry observers say it is now about having a unique selling point.

Mr Michael Tan, a member of the collective sales committee, told The Straits Times one of Leonie Gardens’ attractive points is that it is “right at the top of the hill and the slope up Leonie Hill is so pleasant and charming, away from the thoroughfare”.

Leonie Gardens, known for its towers with a reddish hue, comprises two 23-storey blocks and an eight-storey block on a 14,000 sq m site.

It is near the Orchard, Somerset and upcoming Great World City MRT stations, and is within walking distance of malls such as Ion Orchard.

Mr Tan noted the District 9 site has a plot ratio of 2.8, which allows tower blocks to rise as high as 36 storeys. The site is “the crown jewel of Leonie Hill, and going en bloc is in line with the Government’s stance of rejuvenation”, he added.

The sales committee was formed on Sept 30 at an extraordinary general meeting, with more than 50 per cent of those who attended in favour of the collective sale exercise. It had also closed a tender last Thursday for a marketing agent and solicitor.

The 99-year leasehold property has 138 units and was completed in 1993. Industry players had noted back then the project has Hawaiian-theme surroundings, such as waterfalls and a lagoon, and was priced higher than other apartment units in District 9.

Mr Tan noted the condo had planned for a collective sale 10 years ago but market sentiments had cooled before the process could begin.

Dr Lee Nai Jia, head of research at Edmund Tie & Company, said: “Developers will consider the site as the location is good but whether the pricing fits their requirement is another thing.

“They’ll consider (whether) there is a freehold plot nearby. And if it’s about getting a 99-year site, why not consider Jiak Kim Street instead, with its Zouk identity? It would be interesting to see how it will be marketed,” he said.

Mr Maniyadeth Narayanan, a member of the committee who has lived in the estate since 2003, loves the view of the bustling Orchard Road shopping belt from his flat.

But practicality takes precedence. He said: “If I can get a fairly good price, why not? There are issues with an ageing condo, even though it has been well maintained. I’ve not thought about what comes next, and going en bloc takes some time, maybe a year and a half.”