At least one in two people plan to buy a home, and more are looking to buy this year than in the past. Of the 611 respondents to the EdgeProp-Knight Frank Homebuyers’ Sentiment Survey, 55.6% said they were looking to purchase a residential property in Singapore in the next 12 months.

The survey was jointly conducted by EdgeProp and Knight Frank Singapore in 4Q2017. In the previous survey conducted in 2016, 51.2% of the 500 respondents said they were on the lookout for a residential property in Singapore (see Chart 1). 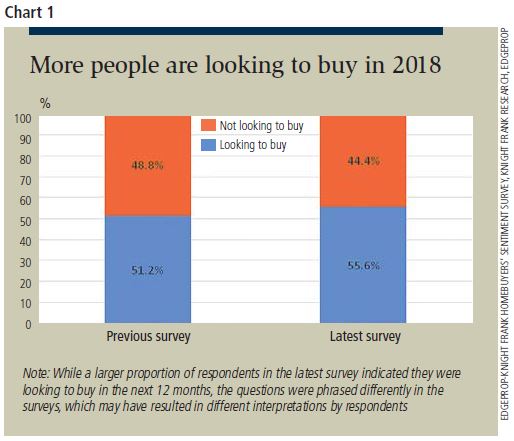 A key reason for the increase in homebuying interest is record land bid prices in government land sales (GLS) and collective sales, which have “created an expectation of higher prices within the next year or so, prompting buyers to take positions as soon as they can before the new price level can actualise”, says Alice Tan, director and head of consultancy and research at Knight Frank Singapore.

According to figures released by URA on Jan 2, prices of private residential property rose 0.7% in 4Q2017, following a similar increase in 3Q2017. “For the whole of 2017, prices have increased by 1%, compared with the 3.1% decline in 2016,” says URA. Given that prices are beginning to rebound, it is likely that more people would be prompted to buy before prices rise further.

Another reason is “the release of pent-up demand from prospective homebuyers over the past four years, built up since the seventh round of cooling measures and the total debt servicing ratio [TDSR] ruling implemented in 2013”, according to Tan. An indication of pent-up demand would be the transaction volume for private residential properties in Singapore, which plummeted sharply between 2012 and 2014 but has since been on an uptrend (see Chart 2). 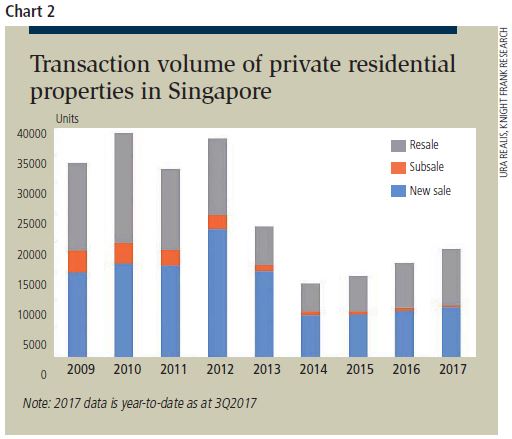 A good proportion of those looking to buy in the next 12 months are already property owners. At least 58.5% indicated that they already owned one, while 15.9% said they owned multiple properties. Most of those looking to buy said the property would be for their own use or renting out, with a smaller proportion of respondents indicating other reasons such as for their children, as a future retirement home or for capital gains. Potential homebuyers who do not currently own a property are more likely to be owner-occupiers, while those who already own properties are likely to be rental investors (see Chart 3). 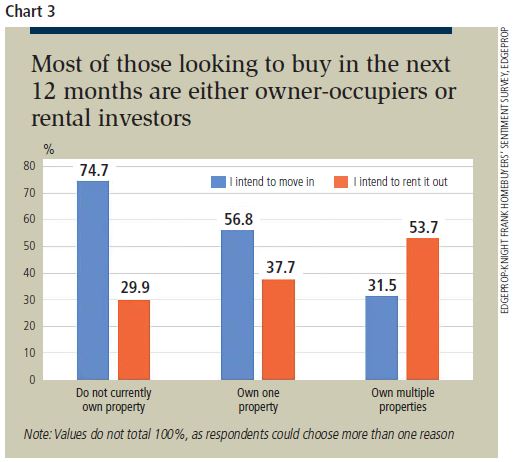 Preference for condos in prime districts

Perhaps owing to the high proportion of investors among the respondents, the results indicated a preference for private condominiums and apartments, with 65.6% of the respondents selecting that as their preferred property type. This is followed by HDB flats at 15% and executive condos at 9.1%, with the remainder split between landed houses, strata-landed properties and shophouses. HDB flats and ECs are subject to a five-year Minimum Occupation Period and rules for resale and rental, which make them less favoured as investment properties. 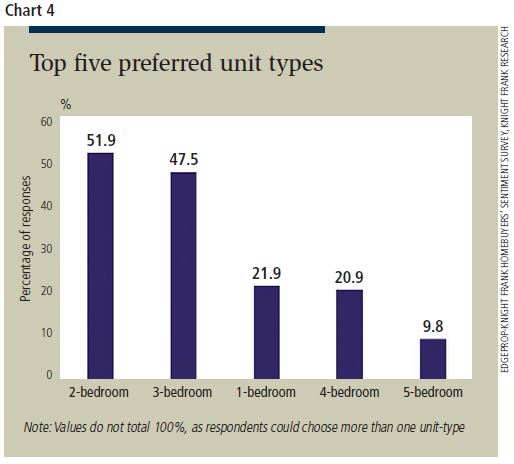 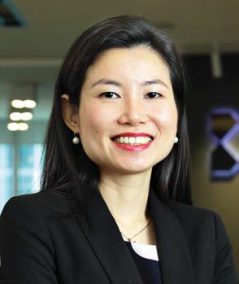 Tan: Record land bid prices have created an expectation of higher prices, prompting buyers to take positions as soon as they can

“With prices for some private homes in CCR hitting attractively low levels in 2017, demand for value-for-money buys naturally increased, along with rising optimism, following the collective sales boom that began in May 2017,” says Tan. In 3Q2017, the transaction volume in CCR rose 85.1% y-o-y, reflecting the return of interest, she adds. 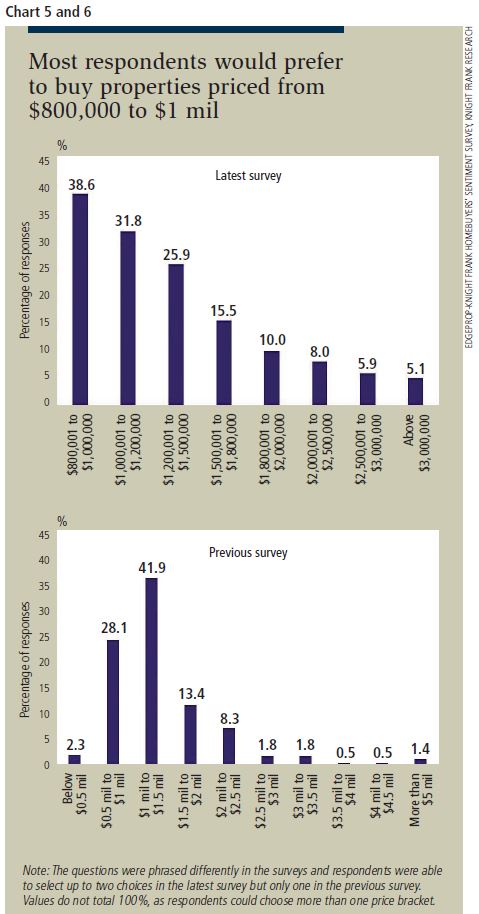 In 2017, most of the transactions for private non-landed residential properties were in the $1 million-to-$1.5 million price bracket, according to URA caveat data as at Jan 2. The proportion of transactions in this price bracket also rose 2.3 percentage points from 2016. There appears to be a shift in homebuyer’s preference from 2016 to 2017, showing a propensity to purchase pricier properties, based on the proportion of transactions in each price bracket. This might be due to the type of units available for sale in the market and the prices set by sellers (see Chart 7). 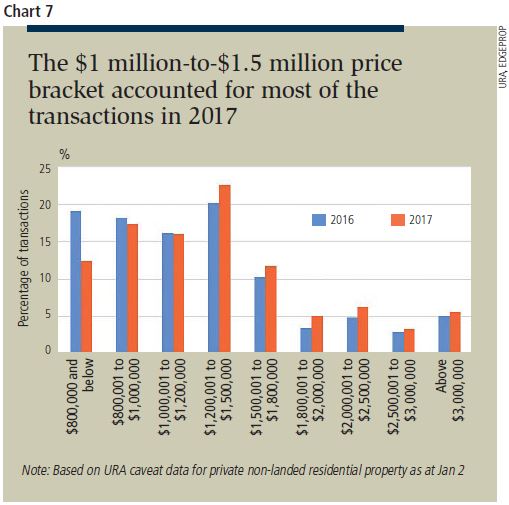 Of the 611 respondents in the latest survey, 44.4% said they did not plan to buy a residential property in the next 12 months and the biggest hurdles holding them back were the additional buyer’s stamp duty (33.6%), preference for other types of investments (30.3%) and uncertain economic and job prospects (27.7%). A small proportion of 16.6% also felt that prices might decline further (see Chart 8). 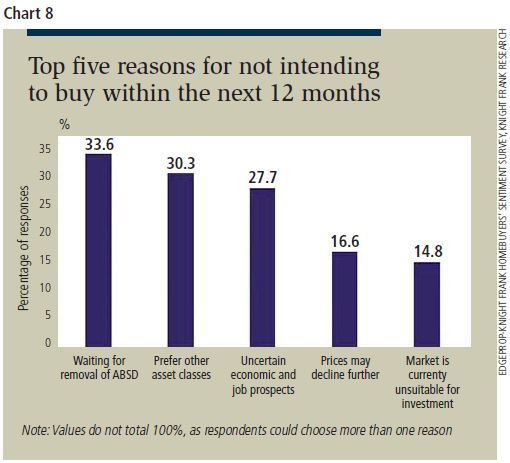 This could point to a “mismatch in market confidence versus current price recovery and home price affordability in Singapore, as many Singaporeans do not think that their future job prospects and salary expectations match future housing prices in Singapore”, says Tan.

“This can also be inferred from the price expectations of non-landed private residential units, with an increasing proportion of respondents thinking that prices will increase more than 3% a year in the medium to long term.” (see Chart 10)

Their worries notwithstanding, people still felt confident about Singapore’s political leadership, economy and the residential property market, with 58.4%, 51.4% and 52.3% of respondents indicating a “good” and “excellent” confidence for these factors, respectively.

On Dec 13, the Ministry of National Development warned of “a large potential supply of around 20,000 units from awarded en-bloc sale and GLS sites that have not yet been granted planning approval, on top of the around 18,000 unsold units that already have planning approval. Moreover, more than 30,000 existing private housing units remain vacant”.

Despite the high vacancy rate, an increasing proportion of survey respondents think that rents will increase, and at a faster pace of growth, in the longer term (see Chart 11).

In his 2018 New Year message, Prime Minister Lee Hsien Loong said: “Last year, our economy grew 3.5%, more than double our initial forecast. Incomes have gone up across the board, especially for low and middle earners.”

“Despite stronger economic performance in 2017 versus 2016, consumer sentiment remains fairly cautious amid rising inflation,” says Tan. She notes that prospects in the job market have remained tepid, with limited growth in overall employment, and income growth could be uneven across various occupations and income groups. “Nonetheless, the prospect of better conditions this year may fuel interest for residential property,” she adds.

Another factor that could lead to more homebuyers entering the market would be the spate of successful collective sales. Those whose homes have been sold through such sales will require replacement accommodation, says Tan Tee Khoon, executive director and head of residential project marketing at Knight Frank Singapore. “Those not affected by collective sales may also be spurred to consider purchasing soon, as they foresee prices going up.” 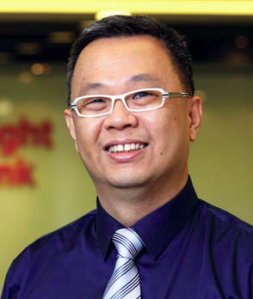 Tee Khoon: Those not affected by collective sales may also be spurred to consider purchasing soon, as they foresee prices going up

Vista Park was put up for sale by tender on Nov 17, with an asking price of $350 million. On Dec 14, Oxley Holdings announced its acquisition of Vista Park for $418 million ($1,096 psf per plot ratio). This follows its purchase of Apartment 8, a freehold property on Meyappa Chettiar Road in Potong Pasir, for $21.53 million. Oxley, which has been an active buyer of collective sale sites, has nine residential projects with more than 4,000 units in the pipeline for launch.

“[More people would] expect price increases across the board, including for HDB flats in sought-after locations, when they read news of aggressive land bids from the recent collective sale and government land sale sites,” says Tee Khoon.