Two National University of Singapore experts discuss the impact of collective sales on the private housing market, including whether prices will continue to edge up. 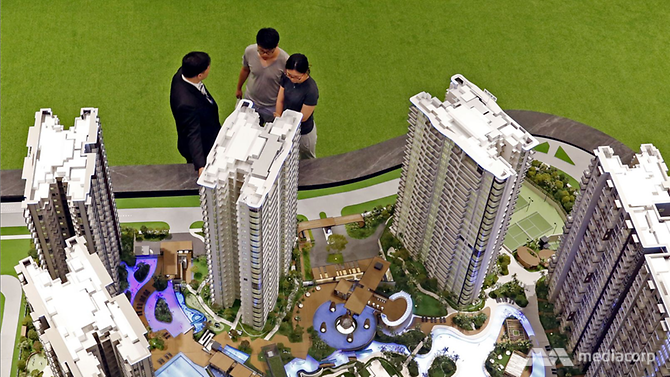 SINGAPORE: 2017 has been a year of revival for the Singapore property market.

A surge in transaction volume in the private housing market after the third quarter may have seemed like the first sign of optimism. But the pick-up came much earlier as prescient developers snapped up lands put up for en bloc sale starting in the second quarter.

With 37 tenders worth more than S$8.7 billion being awarded last year and even more properties put up for collective sale since, the en bloc frenzy seems unstoppable – not least because of property owners who have been waiting all this while and are more than happy to cash in on the hype.

2018 is therefore the year to watch for signs of the market cooling off.

In recent months, experts have warned against getting swept up in the en bloc frenzy and urged for investors and authorities to look out for tell-tale signs of a property market bubble.

They advise caution, having borne witness to the two previous waves of en bloc frenzies in 1997 and 2007.

In the three years preceding the Asian Financial Crisis in 1997, almost 100 en bloc sales were completed.

Just before the Global Financial Crisis hit in 2007, almost 170 properties changed hands in collective sale deals, with the fever reaching a total transaction price of S$12.61 billion in one single year.

Although the 2017 en bloc round seemed small compared to the last two waves, the words of experts urging for clear heads have credence.

The deals closed thus far over the past year involved much larger sites, exposing developers to significant financial risk.

Aggressive land banking by developers have not let up, even as their costs have reached record-breaking collective sale prices. 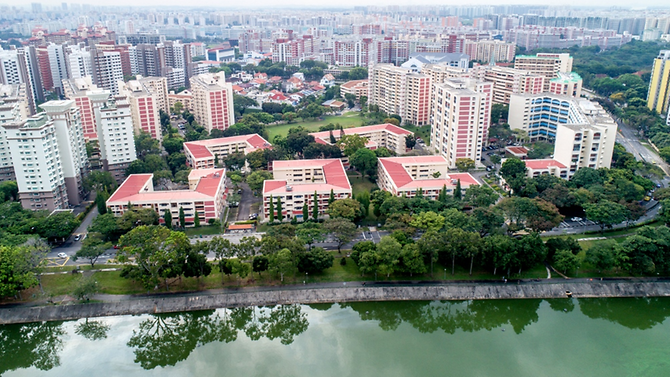 Will the en bloc fever cause future housing prices to edge up especially when aggressive developers continue to place sky-high bids? Will these cause rising prices to spill over to neighbouring projects?

Alternatively, when this round of musical chairs stop, will developers be stuck with large tracts of property, forced to sell at significant discounts?

In the near term, we think there is room for optimism as this round of en bloc sales looks set to boost prices in the private housing market.

We can expect the uptick to fuel even more collective sale activities. More of such deals are already being put together by en bloc sale committees and real estate consultants in 2018.

Past data supports this optimistic projection – a bumper crop of en bloc sales in 2007 seemed to have underpinned a strong upward price trend in the private housing market that subsequently peaked in 2008. 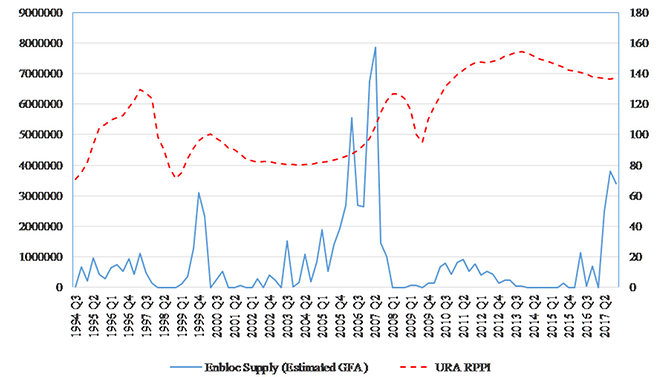 There is a one-year lag between an uptick in en bloc sales (in blue) and an increase in property prices in the private property market (in red is the URA Residential Property Price Index). Just look at the bumper crop of en block sales in 2007 and the strong upward price trend peaking in 2008.

Meanwhile, it is premature to argue that the en bloc frenzy in 2017 will lead to overheating in the private housing market, given the strong slew of anti-speculation measures that are still in place since February 2010.

As Minister for National Development Lawrence Wong may have subtly hinted, the high bids put in by developers might not translate into higher sale prices down the road when developers are incentivised to maintain realistic expectations or risk getting penalised.

“Bear in mind that developers are also subject to the Additional Buyer’s Stamp Duty”, he added in a reply to a parliament question on the en bloc frenzy in November 2017.

Developers are only eligible for the Additional Buyer’s Stamp Duty remission rule if they complete and sell all units of their developments within five years from the land purchase.

Let’s also not forget that authorities can make adjustments to the amount of land released via the Government Land Sales to correct supply imbalances in the private housing market and curb rising prices in a hot market. 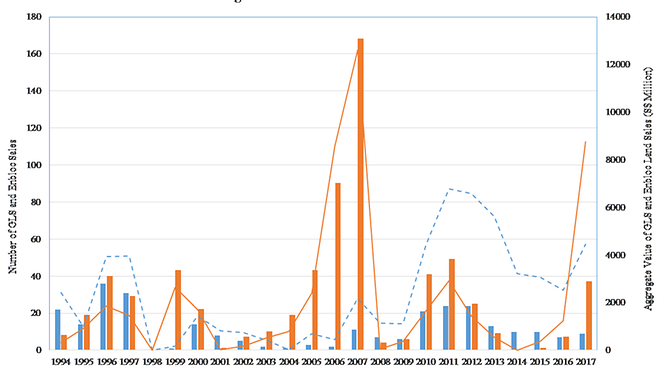 Authorities have been using the Government Land Sales as a tool to regulate supply of land, so as to keep the private property market in check. In blue are GLS sites, more of which have been released to cool off rising prices in the late 1990s and over 2010 and 2012.

All these should temper the chances of a scenario where developers are stuck with properties they cannot sell for a price that recoups their cost or a situation where prices soar beyond what is affordable for a Singapore household in the middle to high income bracket.

There is also reason to believe that new developments at old en bloc sites are likely to continue to command a premium, where many provide a rare source of high-quality land in usually well-developed estates with dense transport links.

In fact, we’ll argue there is also good reason to keep the en bloc frenzy on a slow boil – and to keep the music going.

News coverage and commentary on en bloc sales usually spotlight on property owners, an obvious group of winners who benefit from the sale proceeds, save the few reluctant to move out of a long-held home.

But what most news coverage ignores is that an en bloc sale is a cure for mounting maintenance costs for an ageing property reaching a critical half-life milestone in their leases.

These provide useful injections to old, low-density neighbourhoods, attracting younger families with higher incomes and stimulating commercial interests in those areas. They also go some way in rejuvenating local communities while getting rid of older, more dilapidated buildings. 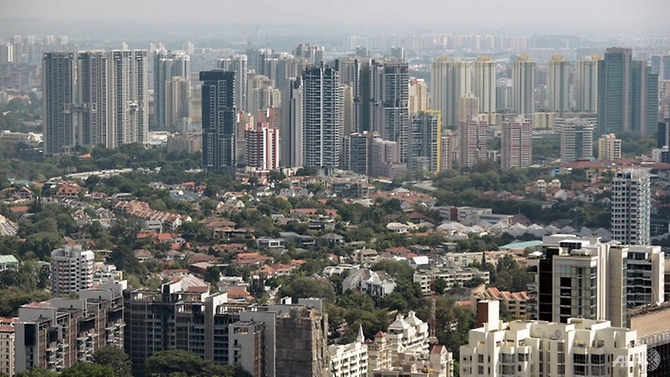 Analysts have said the residential en bloc market in Singapore is poised to pick up in 2017. (File photo: AFP)

Through en bloc sales, the gentrification of mature estates may not only be a common occurrence but an encouraged phenomenon.

En bloc sales may be an effective tool for urban redevelopment, if coupled with infrastructure and transport planning that keeps up with changing demographics in a neighbourhood.

The local community also stands to benefit. Land developments taxes collected by the Government from granting higher density developments and extending the lease period of land plots can be indirectly redistributed back to the neighborhood through investments in better local amenities and public transport networks.

The Government also has a say in refusing redevelopments of older en bloc sites, if new developments incur signiicant negative externalities in terms of traffic congestion and overcrowding.

In November 2017, the URA introduced a new rule requiring a pre-application traffic impact study before an en bloc redevelopment application can be processed.

So it seems not only will this round of musical chairs continue for a while, boosting prices in the private housing market, but it’s also in Singapore’s urban redevelopment interests to keep the music going.

Associate Professor Sing Tien Foo is the Dean’s Chair and Director of the Institute of Real Estate Studies at the National University of Singapore. Chia Liu Ee is a researcher at the same institute.