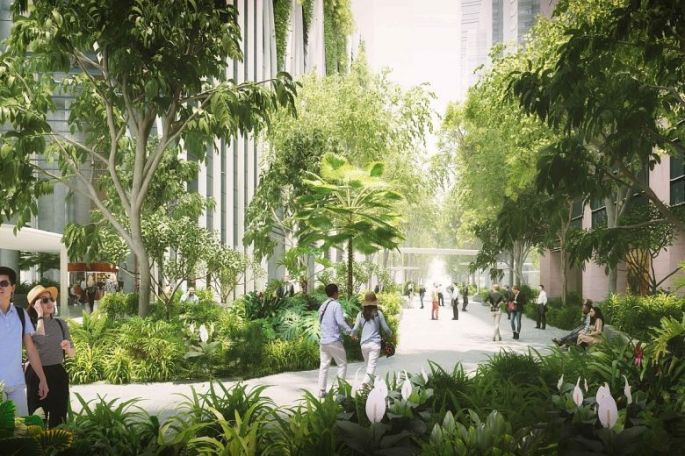 An artist’s impression of the 12,500 sq ft public park. It is among a slew of moves aimed at making the area greener and a “vibrant people-friendly zone”, said National Development Minister Lawrence Wong.PHOTO: CAPITALAND

A public park will be one of the features to be incorporated into the re-development of the former Golden Shoe Carpark in Market Street.

As well as the 12,500 sq ft space, footpaths along Market, Malacca and Phillip streets will be widened with added greenery, and sheltered linkways will be established in Malacca Street between Raffles Place and other developments.

New cycle paths will also be built along these streets, which will connect to the Central Area cycling network.

CapitaLand, CapitaLand Commercial Trust and Mitsubishi Estate are redeveloping the old carpark at 88, Market Street into a $1.82 billion integrated development.

National Development Minister Lawrence Wong said at a ground-breaking ceremony yesterday that these moves are aimed at making the area greener and a “vibrant people-friendly zone”.

“We hope that Raffles Place will be an area that is not only bustling with the working crowd in the daytime, but will also be a place where people will want to visit to gather and interact at night,” added Mr Wong, who is also Second Minister for Finance.

At 280m, the 51-storey tower will be among the tallest in Raffles Place. It will have 350 carpark spaces from levels four to eight. Golden Shoe Carpark had 1,053 parking spaces.

The former Market Street Carpark had 704 car parking spaces. CapitaGreen, the 40-storey Grade A office tower on the site which opened in 2015, has 180 parking spaces.

Market Street Food Centre, which was previously housed at Golden Shoe Carpark, will reopen at the second and third levels. It will be owned by the Ministry of the Environment and Water Resources. Stallholders are operating at an interim food centre in Cross Street.

An artist’s impression of the 51-storey tower. CapitaLand, CapitaLand Commercial Trust and Mitsubishi Estate are redeveloping the old carpark into a $1.82 billion integrated development. PHOTOS: CAPITALAND

National Parks Board, in collaboration with CapitaLand.

The work is expected to start next year and will be completed by the first half of 2021, along with the integrated development.

The new project will have a gross floor area of about 1 million sq ft, comprising 635,000 sq ft of Grade A office space, a 299-unit Citadines serviced residence to be managed by The Ascott and ancillary retail space.

It will also have a sky garden, and on the ground floor, there will be a “City Room”, which can be used for community events.

“We are confident that this integrated development will attract progressive companies seeking a future-enabled environment to grow their business and attract the best talent,” said CapitaLand chairman Ng Kee Choe.