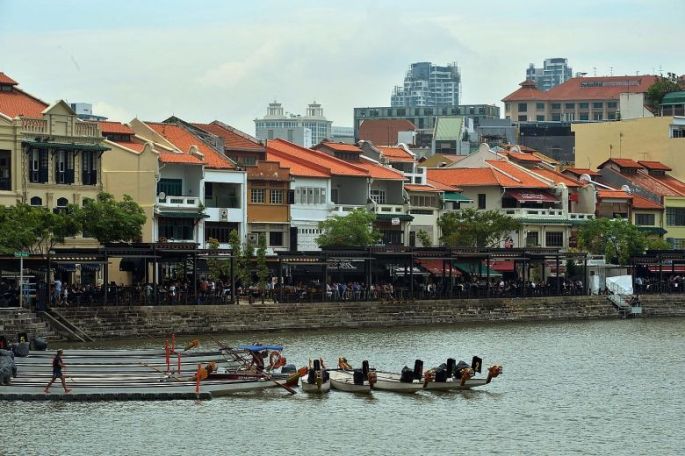 Good shophouse deals are hard to find and those that are partly residential are not available to foreigners. But last year saw 148 transactions, topping $1 billion, a 40 per cent jump over 2016, according to CBRE’s analysis.ST PHOTO: KELVIN CHNG

As a hiding place from US President Donald Trump’s trade war against China, a cosy corner of Singapore’s real estate holds much appeal.

A two-or three-storey terraced building close to the city’s central business district, home quite often to a wine bar or gastro pub at street level with a massage spa or music lounge tucked away upstairs, has been in bigger demand this year than industrial sheds.

Shophouses are mixed-use buildings constructed between the 1840s and the 1960s that formed the majority of the pre-World War II urban fabric of the old city centre.

Deals of more than $5 million for these conservation dwellings increased 281 per cent from a year earlier to a record $478.6 million in the first quarter.

The surge to strong demand is attributed to local and foreign high-net-worth individuals, as well as property funds and investment firms.

The contrast with industrial developments is stark. Strip out a land sale by the Government for a shared executive learning centre (more a services business than a manufacturing operation), and total investment sales for the quarter – transactions worth $5 million or more – came to just $276 million.

For a couple of industrial sites authorities had made available, there were no bids.

Mind you, brokers do expect an increase in interest for industrial properties, particularly from wannabe landlords of logistics units.

Amazon.com, for example, brought its Prime delivery service to Singapore last year. However, investors also have reason to exercise caution. Any escalation of a Washington-Beijing trade spat and dislocation of a China-centric electronics supply chain would hurt the city-state too.

Houses are undoubtedly safer bets. Residential property prices are on the mend after a government-engineered cooling. That, and an expensive Hong Kong home market, is attracting investors.

The outlook for the city’s office market is firming, though oversupply is still an issue. By contrast, there are fewer than 7,000 shophouses.

The $82.5 million cheque that local investment firm 8M Real Estate wrote for a bouquet of 10 terraces in Boat Quay and Circular Road in March takes its total holdings to 40 conservation shophouses, valued at about $500 million.

Tenancies at shopping malls are getting renewed at rates that will not exactly make landlords jump with joy. Online shopping is one reason to be gloomy; banks’ desire to boost their digital presence (and save money on physical branches) is another.

Shophouses are not completely insulated from economics. But their yields can survive vicissitudes in global trade better than a mall in Jurong East, whose footfalls and fortunes are tied to global oil prices.

Outside of the central business district, gentrification – for instance of the Joo Chiat neighbourhood into a hipster hub – is also a pull.

It is not easy to find good shophouse deals, and those that are partly residential are not available to foreigners. Still, last year saw 148 transactions, topping $1 billion, a 40 per cent jump over 2016.

This is not a fluke. Short of a pandemic like Sars, which forces people to stay home, a heritage shophouse in all its pastel glory may be a safe haven for smart money in the age of Trump.