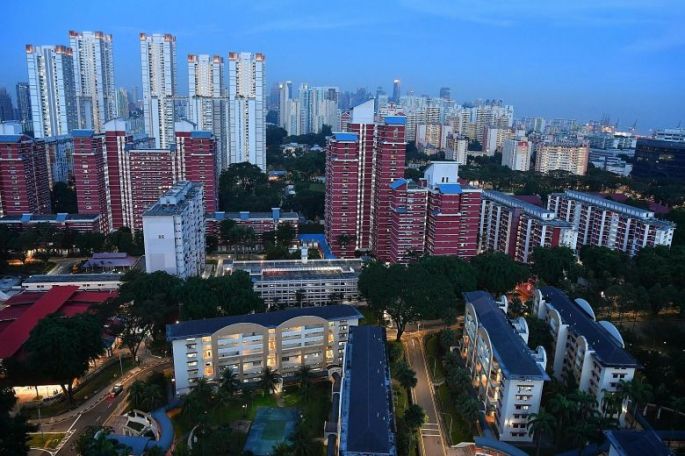 The Housing Board resale volume last month is lower than the previous record low, in May 1990, when 778 flats were resold. It is also lower than the 2,160 flats resold in April 2003 during the severe acute respiratory syndrome outbreak. Overall, resale prices last month were 0.04 per cent lower than in March, although they were still 1 per cent higher than in April last year.ST PHOTO: CHONG JUN LIANG

The Housing Board (HDB) resale volume has hit a record low, plummeting 78.3 per cent last month from March, as circuit breaker measures put in place to stem the spread of the coronavirus curbed home viewings.

This is lower than the previous record low, in May 1990, when 778 flats were resold. It is also lower than the 2,160 flats resold in April 2003 during the severe acute respiratory syndrome outbreak.

Prices for five-room flats bucked the trend by rising 0.2 per cent.

Overall, resale prices last month were 0.04 per cent lower than in March, although they were still 1 per cent higher than in April last year.

She said: “While sales demand usually moderates during an economic crisis, last month’s transaction (volume) was much lower than what was observed in previous crises.

“The stay-home measures have complicated the whole home buying process, such that all physical house viewings were not permitted and prospective buyers had to rely solely on remote means, such as virtual house tours to assess the condition of a resale home before making a purchase.”

Although immersive virtual home tours may be offered, some buyers may still prefer a physical inspection of the units, Ms Sun said.

The closures of HDB Hub and branches during the circuit breaker period, as well as the suspension of the scheduling of appointments to process sales transactions, further dampened the mood. 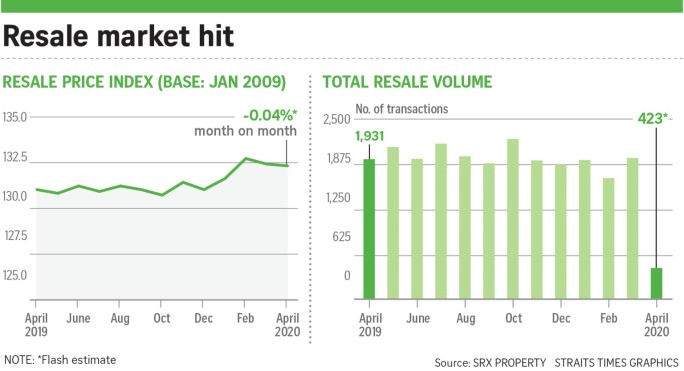 “Some buyers may have delayed their purchase since there is some uncertainty as to when the whole sales process can be completed.”

ERA Realty head of research and consultancy Nicholas Mak agreed, noting that the 423 flats resold last month was a sharp contrast to the 1,949 units that changed hands in March.

He added that resale volume “fell off the cliff”, and that “waiting for May’s figures is like waiting for the other shoe to drop”, given that measures have been extended till June 1.

He said prices could contract by 0.8 per cent to 2 per cent year on year, and HDB resale transactions could decrease by up to 25 per cent this year.

This outlook already takes into account that some buyers would be turning to HDB flats instead of private housing amid the pandemic, as well as the large number of new flats that would reach the end of their five-year minimum occupation period this year.

“Although HDB resale prices could decline due to the expected economic slowdown, it would likely be more resilient than resale transaction volume,” he added.

The highest price paid for a resale flat last month was $1.01 million for a five-room unit at SkyTerrace @ Dawson in Queenstown.

SRX data showed that this was the only flat that sold for more than $1 million last month.