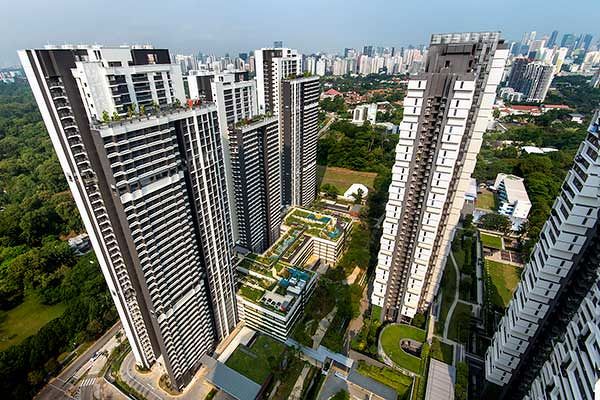 SINGAPORE (EDGEPROP) – A five-room flat at SkyTerrace @ Dawson transacted for $1.01 million in April, the month that saw resale volume for HDB flats hit a record low of 423 flats sold, due to “circuit breaker” measures.

The buyer had viewed the 1,065 sq ft flat just before the circuit breaker period kicked in and exercised the option to purchase later on. The seller is upgrading to a larger private property.

The high-floor unit faces the Sky Park and enjoys a breezy view of Ridley Park and the surrounding Good Class Bungalows. The previous owner had hacked one wall to create a walk-in bedroom in the master bedroom. As such, the unit has two bedrooms.
James Ho, associate group director at PropNex who closed the deal, says: “Because there are only two rooms, we focused our marketing on buyers who are not really looking to raise a family. In the end, a couple in their early 40s bought the unit.”
The unit is tastefully designed in a monochromatic style. It was snapped up about three weeks after it was listed at the beginning of March. Ho shares that 25 groups came to view the unit over three weekends and they received more than 40 enquiries, despite the million-dollar price tag.
The new owners of the flat are upgrading from an older, 40-year-old HDB flat. They were most attracted to the unit’s city-fringe location. SkyTerrace is only an 11-minute walk to Queens-town MRT Station on the East-West Line and only five or six stops to the CBD, via Tanjong Pagar or Raffles Place. Singapore Botanic Gardens and Orchard Road can be reached within 10 minutes by car.
In April, prices fell 1.5% for three-room HDB flats, 0.2% for four-room flats and 1.8% for executive flats from March. However, prices for five-room flats increased by 2%. Ho says: “This million-dollar transaction could have pushed up the average prices. However, I don’t think it is particularly the five-room layout that is high in demand. The location, design and condition of a unit are probably more important.
The 1,718 units at SkyTerrace and SkyVille were almost 12 times oversubscribed when they were launched together in December 2009, even though prices were higher than other BTO launches at that time. The prices of five-room flats at these two developments started from $532,000.
As flats in these two developments reach minimum occupancy period (MOP) this year, supply might increase and make selling units more competitive. However, there might also be more million-dollar deals being transacted as the developments are unique and well-designed. Earlier this year, a five-room unit on the 19th floor at SkyVille transacted at $1.01 million and another five-room unit on the 35th floor of SkyTerrace also crossed the million-dollar mark at $1.038 million.
Adelyn Chan, associate division director at PropNex and founder of D3 Dawson Team, shares that despite stay-home measures, 17 homeowners in SkyTerrace engaged her team to market their unit in March. As of May 12, her team is managing more than 20 units there.
Update from : Edgeprop 15 May 2020