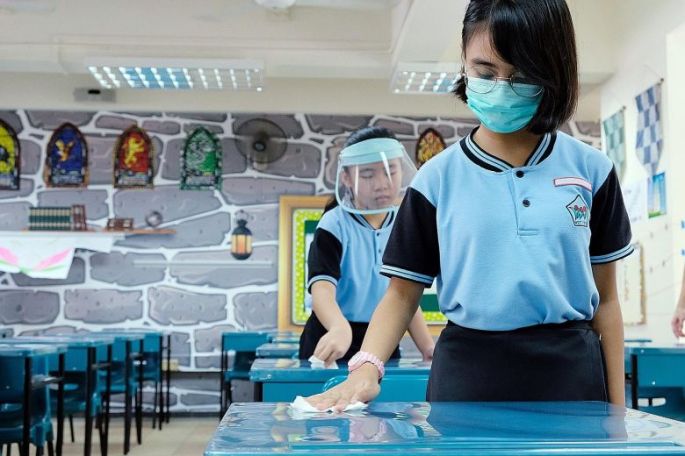 Schools must put in place hygiene practices when they reopen, such as having students wipe down surfaces before leaving the classroom.PHOTO: MOE.

Singapore’s circuit breaker will formally end on June 1, as the country gradually restarts its economy in three phases over the next several months.

This will not mean a return to life before the coronavirus, National Development Minister Lawrence Wong said yesterday, outlining the broad plan for the months ahead.

Singapore will proceed with caution in the first phase, where many existing restrictions will continue. This phase is expected to last at least four weeks.

If all goes well, it will then move into the second transitionary phase, which could spread over several months.

Further easing of measures would follow in the third phase, where a “new normal” will remain until an effective vaccine or treatment is found.

New cases are expected to rise as people gradually resume activities, and stricter measures could be implemented at any point if the situation worsens.

While some may be disappointed that they will not be able to go out freely and socialise at the end of the circuit breaker, the reopening needs to be done carefully, said Mr Wong at a press conference yesterday.

“We have to do this in a careful and calibrated manner as we don’t want to risk a flaring up of the virus. And importantly, we do not want to sacrifice the efforts all of us have put into controlling the outbreak,” he said.

He added that the Government will continue to support businesses and workers that are unable to open on June 2.

In the first phase, dubbed “safe reopening”, about a third of Singapore’s workers will be able to resume work at their workplaces, said Trade and Industry Minister Chan Chun Sing. The rest will continue to work from home.

“This will allow three-quarters of our economy to resume normal operations,” he said.

Priority will be given to critical sectors and businesses that operate in settings with lower transmission risks. Those returning to their workplaces or offices include workers or staff who are required to use machinery or specialised terminals.

Meanwhile, retail stores will stay closed, and there will be no dining in at restaurants, during this period.

Schools will gradually reopen next month and certain healthcare services will resume. Places of worship will also reopen, but only for private worship.

Social gatherings will still be prohibited, although exceptions will be made for people visiting their parents or grandparents. Visits will be limited to one a day, with a maximum of two visitors who should be from the same household.

Singapore will move into the second phase if community transmission rates remain “low and stable” and the dormitory situation remains under control.

In this “safe transition” phase, people will gradually be able to resume more social activities. More businesses will be allowed to reopen, including retail outlets, gyms and fitness studios as well as tuition and enrichment centres.

In this phase, which could last several months, small social gatherings and dining in at food and beverage outlets may be allowed.

The idea is to take the country towards its new normal phase called “safe nation”, in which social, cultural, religious and business gatherings are expected to resume. However, limits will be put in place on gathering sizes.

Similarly, places offering services that involve prolonged close contact, such as massages, or with crowds in enclosed spaces, such as cinemas, will reopen only with strict safety management measures in place.

On public transport, commuters will have to wear masks and refrain from talking.

Singapore will also gradually reopen its borders for essential travel. However, this will be carried out separately from the three phases of restarting its economy as the global situation remains volatile. 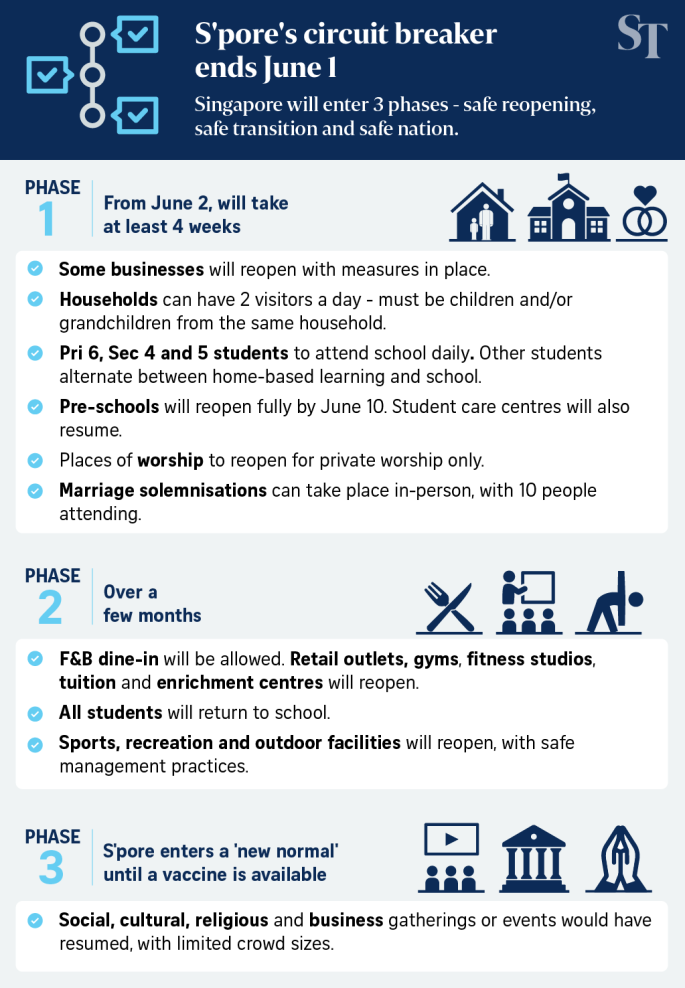