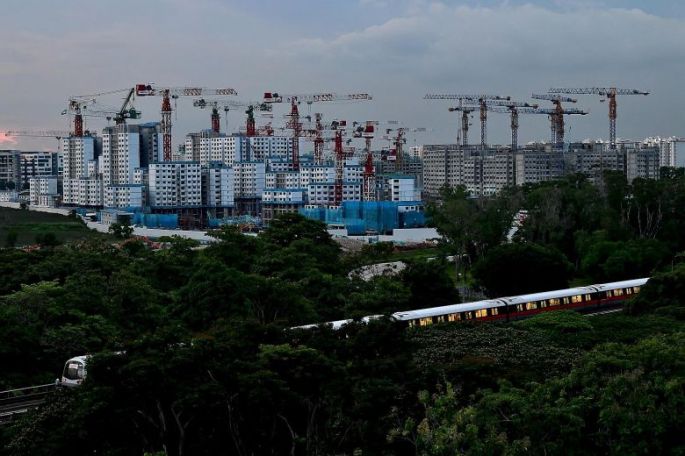 The HDB is working closely with contractors and the Building and Construction Authority on resuming work at various sites in a phased manner. ST PHOTO: LIM YAOHUI

Home buyers who could not apply for a Build-To-Order (BTO) Housing Board flat this month because of the circuit breaker will be able to do so in three months, as the flats originally scheduled for launch this month will be combined with the August BTO exercise.

This is even as the HDB said yesterday that some BTO projects are expected to be delayed by up to six months due to the coronavirus outbreak.

Another 5,700 flats in Bishan, Sembawang, Tampines, Tengah and Toa Payoh will be offered in November.

Of these, the flats in Choa Chu Kang and Tampines North from the August launch, and those in Tengah from the November launch, will have shorter waiting times, the HDB said.

The update comes after the HDB said in April that this month’s BTO exercise would be postponed until further notice. This month, about 3,700 BTO flats in Choa Chu Kang, Tengah, Pasir Ris and Tampines and about 160 assisted living flats for seniors in Bukit Batok were supposed to be launched.

One applicant who will be applying for a BTO flat in Geylang come August is Mr Aiden Chia.

The 25-year-old who works in finance had applied unsuccessfully for a flat in Tampines in November last year.

He said: “I was a little disappointed when the May BTO exercise was delayed but, of course, it is understandable, given the Covid-19 situation.

“Young couples who are keen (to apply for a flat) are already looking at a pretty long runway before we can actually move into our flats, so I am relieved that HDB has been quick to inform the public that the exercise will be held in August.”

Property experts believe that the larger number of flats in August could mean a higher chance for applicants to secure a flat.

Huttons Asia director of research Lee Sze Teck said: “Buyers have a wide pool of flats to choose from, and this may dilute the subscription rate.”

Chief executive of PropNex Realty Ismail Gafoor also expects that BTO flat prices will not change much despite the combined BTO exercise. This is because BTO prices are based on current market prices and the public housing market has been relatively stable, with no growth in the first quarter, he said.

However, some BTO projects are expected to be delayed by up to six months because of the suspension of construction activities amid the circuit breaker period.

The HDB said it is working closely with building contractors and the Building and Construction Authority (BCA) on resuming construction work at the various sites in a phased manner.

Flat buyers will be informed of the revised probable completion dates through their My HDBPage account.

The HDB said the delay is also because of “strict safe management measures that need to be put in place at work sites to prevent major Covid-19 outbreaks”.

Mr Ismail suggested that buyers consider HDB resale flats as an option if they cannot wait.

“Based on today’s resale market… (HDB flat buyers) would be able to get one at a reasonable price, without any delays, and can occupy it immediately,” he said.

The HDB also said yesterday that upgrading works will not resume, and it is working with BCA and its contractors to assess how and when work can resume.

Some critical services will resume from Tuesday via appointments scheduled by the HDB.

Services that will resume include the booking of flats and key collection for new flats and rental flats.

From June 8, the HDB will schedule appointments for other services progressively, including the signing of tenancy documents.