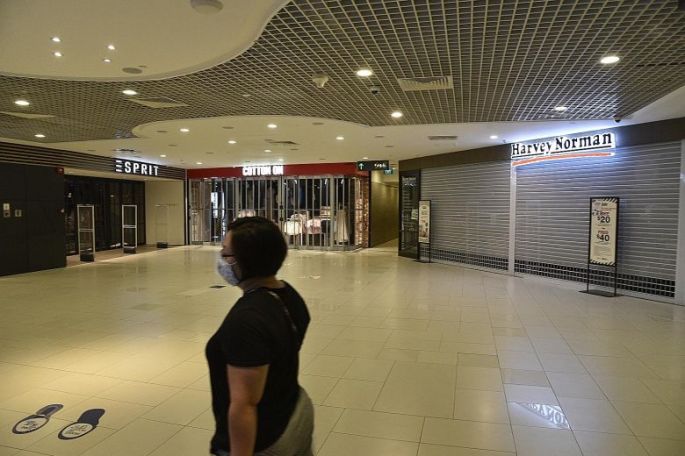 A near-empty Parkway Parade mall with most of its shops closed in May amid Singapore’s circuit breaker. Retail sales that month suffered their biggest year-on-year fall since record-keeping began in 1986. Like in April, only two categories of retail sales saw year-on-year growth in May – sales at supermarkets and hypermarkets, and at minimarts and convenience stores. ST PHOTO: DESMOND WEE

Singapore retail sales in May suffered their biggest year-on-year fall since record-keeping began in 1986, amid a second month of circuit breaker measures, but the worst may be over for retailers, with the economy’s phased reopening.

Takings at the till plunged by 52.1 per cent year on year, after sinking a revised 40.3 per cent in April, according to data released by the Department of Statistics yesterday. Excluding motor vehicles, retail sales fell 45.2 per cent.

This makes for 16 straight months that retail sales have dropped.

But May is likely to be the cruellest month for retailers, with sales set to begin recovering as the circuit breaker period ended on June 1.

“With the reopening of stores during phase two, we can expect some improvement from June onwards, with a potential initial snapback in pent-up demand,” said Ms Selena Ling, head of treasury research and strategy at OCBC Bank.

But she cautioned that the real test is whether the demand momentum can sustain into the second half of the year, given job uncertainties here and the emergence of a second wave of Covid-19 infections globally, as well as the hesitation to resume international travel.

“At this juncture, given the significant uncertainties, even an initial June retail bounce may not be sufficient to compensate for the shortfall seen in the two months of ‘cold storage’ during the circuit breaker.”

Ms Ling sees retail sales contracting by a milder 10.5 per cent last month, and possibly returning to growth by the fourth quarter of this year. “That said, retail sales are still likely to contract by 9.5 per cent for the whole of 2020, signifying a Covid-19-induced recession for Singapore.”

Like in April, only two categories of retail sales saw year-on-year growth in May. With essential services staying open, sales at supermarkets and hypermarkets rose 56.1 per cent, while those of minimarts and convenience stores rose 9.1 per cent. 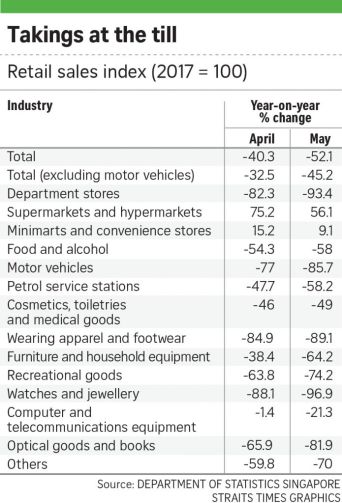 With all food and beverage establishments allowed to operate only on a takeaway or delivery basis in May, takings in this category fell 50.1 per cent, a slim improvement from the 52.7 per cent drop in April.

Restaurants again bore the blunt, with sales diving 68.7 per cent year on year. Revenue dropped 45.1 per cent for food caterers and 41.4 per cent for cafes, foodcourts and other eating places. Fast-food outlets saw a decline of 20.5 per cent in sales.

The evident popularity of online shopping seen in both April and May will likely encourage retail stores to actively incorporate IT and digital solutions to supplement their businesses, said Mr Gan.

Retailers who benefited most from online sales were in computer and telecommunications equipment, where online sales accounted for 94.3 per cent of total sales in May. They were followed by those in furniture and household equipment (93.6 per cent), food and beverages (44.6 per cent) and supermarkets and hypermarkets (9.6 per cent).