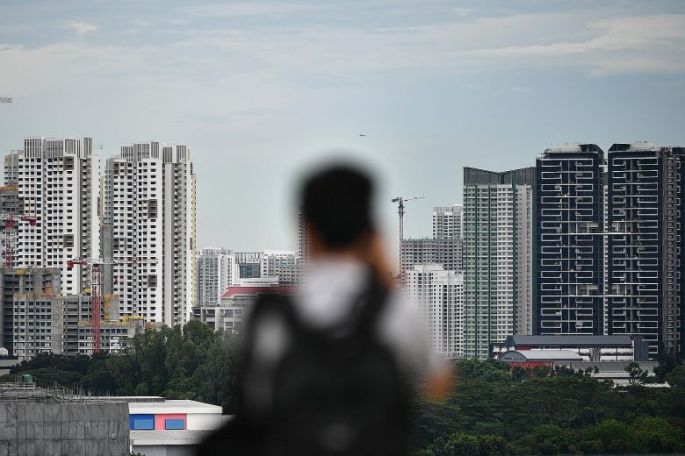 Despite the high sales volume, an industry expert cautioned that the significant spike may be attributed more to a backlog of transactions and may not be indicative of a market recovery.ST PHOTO: LIM YAOHUI

Almost seven times as many Housing Board (HDB) resale flats were sold last month compared with May, according to flash data released by real estate portal SRX Property yesterday.

Estimates showed that about 2,450 HDB resale flats were sold last month, up from 364 the month before.

The surge in sales was likely due to the end of Singapore’s circuit breaker period, said industry analysts.

ERA Realty’s head of research and consultancy Nicholas Mak said: “Pent-up demand accumulated in the eight-week circuit breaker had driven up HDB resale transaction volume in June 2020 to 6.7 times the volume in the preceding month.

“During the circuit breaker period, potential home buyers and property agents were not allowed to visit and view any properties offered for sale. When buyers were allowed to view properties in June, the result was a sharp increase in transactions of HDB resale flats.”

He added that the resale volume last month was also the highest monthly volume since July 2018, when 2,553 units were transacted.

“It was as if the HDB resale market was on steroids in June,” said Mr Mak.

Ms Christine Sun, head of research and consultancy at Orange Tee & Tie, cautioned that the significant spike in sales volume may be attributed more to a backlog of transactions and may not be indicative of a market recovery.

She said: “Some transactions were delayed, as certain procedures like resale completion appointments could not be finalised during the circuit breaker period, when the HDB Hub was closed.

“Some buyers were also waiting for the safe distancing measures to be eased before inspecting the units physically and making a purchase.”

The number of resale flats sold last month was also 26.7 per cent higher than that of June last year, when 1,936 transactions were made. 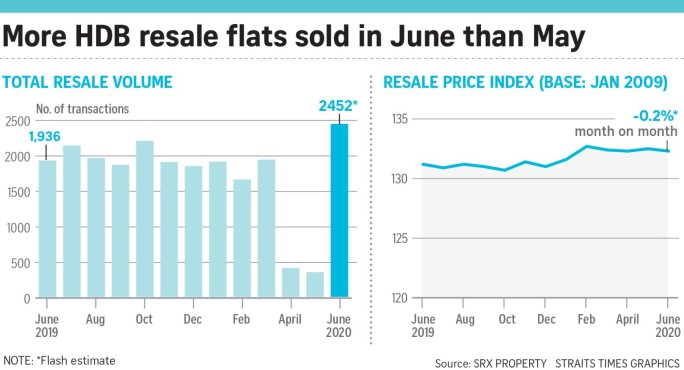 Despite the high sales figures, resale prices dropped by 0.2 per cent last month compared with May.

Mr Mak said the decrease indicated that many sellers were realistic about current market conditions.

Comparing this year’s second quarter resale volume to that of the past four quarters, Ms Sun said that the quarterly sales were considered weak. About 3,200 flats were sold in the second quarter of this year, compared with more than 5,500 in each of the previous four quarters.

Mr Mak said that resale figures this month could remain relatively high, at about 2,100 flats, as pent-up demand continues to work its way through the public housing market, before returning to a more sustainable monthly volume of between 1,600 and 2,100 flats.

After low sales of below 500 units in April and May, Ms Sun said the HDB resale market may continue to improve in the coming months if the pandemic situation remains under control in Singapore and the economy does not deteriorate drastically.