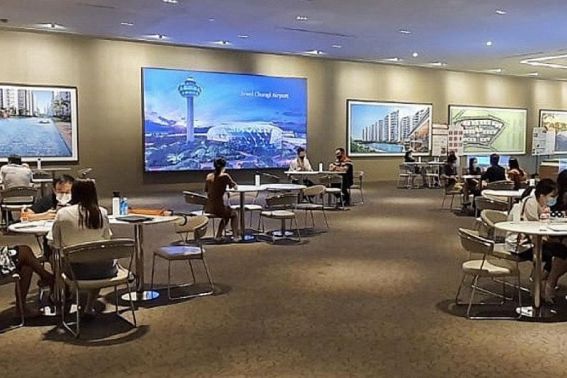 The show gallery of condominium development Treasure At Tampines, which sold 104 units last month at a median price of $1,348 psf. The 998 non-landed private homes sold last month was the highest number of monthly sales recorded for June in seven years, seeming to indicate some resilience in the property market.PHOTO: SIM LIAN LAND

With the reopening of Singapore’s economy – and show-flats – on June 19, new home sales posted a surprise rebound last month as pent-up demand was unleashed.

Singapore is undergoing its worst recession since independence, but developers sold 998 non-landed private homes last month, up 105 per cent from May, when 487 private homes were transacted.

It was also the highest number of monthly sales recorded for June in seven years, and seems to indicate resilience in the property market despite the recession and the absence of major new launches.

New units booked last month saw an increase of 21.6 per cent from the 821 sold in June last year.

Not all buyers are affected by the recession. Workers in technology and the civil service – sectors that have not yet felt the pain of the pandemic-induced recession – as well as discounts and lower interest rates, underpinned demand, said Mr Nicholas Mak, ERA Realty’s head of research and consultancy.

“We estimate 86 per cent of the total developer sales in June were (transacted) at the median price of $1,000 psf to $2,000 psf, similar to May,” said Ms Tricia Song, head of research for Singapore at Colliers International.

She warned that the sales momentum may slow down as job losses and economic realities sink in.

Last month, 597 new private homes were launched for sale, down from 615 units in May and a decline of nearly 11 per cent from the 670 sold a year ago.

The figures released by the Urban Redevelopment Authority yesterday exclude executive condominium (EC) units, which are a public-private housing hybrid.

Including 33 EC units sold, 1,031 new non-landed homes were taken up last month, about 25 per cent more than a year ago.

Only one new project was launched last month: the 18-unit Parkwood Residences in Yio Chu Kang, which sold one unit at $1,323 psf, or $1.74 million.

The bulk of last month’s sales came from projects launched earlier, driven by demand for mass-market homes in suburban areas or outside the central region, PropNex said.

“The OCR sub-market has proven more resilient, due to more affordably priced projects and demand from HDB upgraders.”

The rebound might cause developers to launch more projects in the second half of the year, according to some analysts.

New launches may include the 633-unit Forett at Bukit Timah, the 566-unit Penrose in Sims Drive and the 640-unit Clavon in Clementi Avenue 1.

The data also showed that, excluding ECs, the number of private homes transacted at $2 million and above rose to 129 units last month from 23 units in May.

“Although show-flats reopened last month, more foreign buyers are purchasing private homes remotely due to border lockdowns or travel restrictions. This is in stark contrast to the past, where many foreigners typically bought a unit only after visiting the show-flat.”